This blog post is part of an ongoing series, Part One of which can be found by clicking here.

At that time, Wallace was living in where he had converted a 950 square foot bungalow into a larger studio and living space. For some time now, the artist had been contemplating the idea of moving closer to the gallery in NYC, but feared that buying even a very small studio in would cripple his finances.

Upon losing the Ruth Siegal Gallery, Wallace knew he needed to find a way around relying exclusively on galleries to show his work. He began toying with the idea of a studio and living space in , where he hoped he could afford to buy something with a little more room.

Wallace spent much of 1989 looking all over for a space. He explored over twenty buildings before he finally found what would become Studio 2846. Wallace would drive into from to visit a few building in one area during the day, and would return later, after dark to experience the area by night – how did it feel? Could he live there? Most, he recalls, were too intense or deserted by night. He kept looking.

At the time, ’s area was extremely troubled. Crime was rampant. “The area was dangerous, there’s no doubt about that. But it was inexpensive and the buildings, though deeply neglected, could be turned into anything if you had the guts and the vision. The potential just called out to me.”

One day, Wallace recalls, he made a right onto as the sun broke through the clouds, illuminating a boarded up, grimy, yellow brick building. There was no for sale sign, but he turned to his friend – “I have to take a look at that place.” His friend shrugged. They went in.

Return soon to read the next installment of The Story of Studio 2846, or subscribe on the right to receive updates as they’re posted.
Posted by Becky at 08:43 No comments:

A poem written by the artist during the process of completing a recent work, The Rapture of Recognition.


There are pieces that flirt across the minds eye
that find,
purchase without cause,
vibrating in breathless anticipation
coupling thus in enlightened understanding.

The whispering of secrets held so tight
as to be unwavering.

These days, on Friday evenings in cities across the country, hundreds of artists pull open the heavy, industrial doors of warehouses and factory buildings-turned- studios to welcome the arts community for open views of their work. But back in the late eighties and early nineties, this was unheard of. Artists relied almost entirely on galleries for their livelihoods—to select, show, and sell their work.

It was 1989, and Wallace had enjoyed a successful decade showing in galleries from Chicago to Houston to New Orleans. One of the most high profile was the Ruth Siegal Gallery in New York. Following the success of a group exhibition at the gallery which included a number of Wallace’s works, Siegal took the artist on full time, and began planning a focus exhibition around his work. “It was such an exciting time,” he recalls. “I felt the momentum; I knew I was at the edge of something.”

One morning, he received a call. Ruth Siegal, the 73 year old owner, was closing down the gallery. Wallace recalls her telling him that if she were ten years younger, she’d love the opportunity to work with him. She felt it would be a four year project to launch his career and establish him in the industry. Unfortunately, it was a project she didn’t have the energy to take on.

Devastated and frustrated, Wallace remembers, “I realized then that I needed to control my own destiny. I couldn’t be at the mercy of galleries for the rest of my career. I had to show my own work.”

Return soon to read the next installment of the Story of Studio 2846, or subscribe on the right to receive updates as they're posted.

Work Continues: The Rapture of Recognition 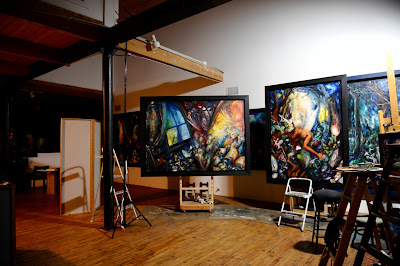 To uncover the finished image that becomes the painting is to work on multiple levels at each instant, grabbing disparate fragments of color and shape and imbuing them with tension so that by the very end of this dance of endless hours of weaving harmonic vibrations together there is a surface that vibrates, alive and rich, revealing the intent within.

Yet, in this process there are only fragments of recollection and it is by unending faith that I continue to travel in this labyrinth of forgotten memories laid down before in recollecting conversation. Conscious always of the peril that lies ahead as both an artist and an observer. 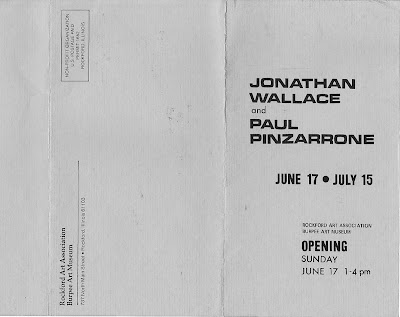 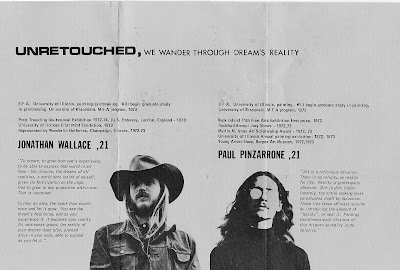 An invitation to Wallace's first museum exhibition, Unretouched, We Wander Though Dream's Reality.

The exhibition opened in the summer of 1973 at the Burpee Art Museum in Rockford, Illinois and featured the works of Wallace and one of his contemporaries, Paul Pinzarrone. At the time, Wallace was an undergraduate at the University of Illinois.

Work in Progress: The Rapture of Recognition 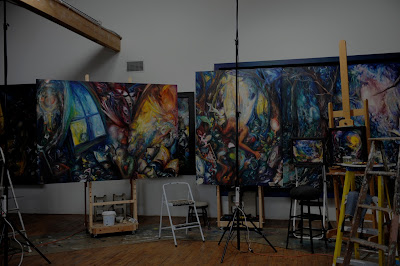 If you follow @Studio2846 on Twitter, earlier this month you would have seen Jonathan share a photograph of one of his current works in progress, tentatively titled "The Rapture of Recognition". The work shown to the left of the photograph above shows the progress that has been made on the piece in the last few weeks.

Jonathan is now at the stage of glazing both this and the larger work to the right of the photograph. "The process of glazing is very intense," Wallace explains, "once it is laid down there is no removing it; I can only go forward. It's a delicate dance and an emotionally exhausting process. This process is part of what gives the paintings their depth, and this quality of inner light."
Posted by Becky at 05:50 No comments:

The Pause Between Breaths

Artist Jonathan D. Wallace has been painting for almost four decades. He divides his time between his studios in Chicago and Montana, working at various scales, and primarily in oils. A classically trained painter and printmaker, Wallace considers himself a philosopher first and foremost: “A philosopher and a journeyman. Leaving traces for people along the way, to help them I hope, in their own             journeys.”
An ethereal quality permeates Wallace’s works, which are luminous with vitality. Fertile forest environments compose the setting of his paintings, which are laden with a rich language of symbolism and motifs that can be followed and unearthed throughout his career. His pieces present a juxtaposition, featuring recognizable everyday objects within a dreamlike milieu, and are fixated around the internal experience – in his words, “the transitional moments of the mind, that pause between breaths.” However, he says, “truly, what I want the paintings to do is to be really beautiful. It makes no difference to me if somebody looks at the work and doesn’t understand the journey I took. I believe that if I am sincere about my journey, it will come across in some form to the person in front of my work.”
Since the mid-seventies, Wallace has exhibited frequently at museums and galleries across the country. His most recent museum showing was at the Butler Institute of American Art as part of the 2008 exhibition, Things I See, which featured five of his oil pastels on paper, a series which the artist was moved to create following the death of his father. “I was working maybe twenty hours a day at that point, desperate to get it all down, not to lose anything.” The dramatic works vibrate with energy and depth. Each of the pieces in the series focuses on one key moment in life, “those fleeting moments where we grasp an essential truth about our existence.”
Wallace describes the act of painting as orchestral, and often works on numerous pieces at one time. This allows him to layer his focus, concentrating on one canvas, glazing and moving to another, before returning to the first piece, bringing the works to completion in rotation. He paints in a spectrum of sizes from small canvases up to pieces of over 12 foot wide. In creating his works, Wallace will often begin with a few words or a line of poetry. “Sometimes that will trigger an image, it will be the seed for a painting. Other times I already see the painting before the first word is written. It’s all part of the same process for me – a fragmented thought, a thumbnail sketch.”
Born in St. Louis, Missouri in 1951, Wallace has a long and colorful history with the art world. During his early twenties, he was featured in his first museum exhibition at the Burpee Art Museum in Rockford, Illinois. Shortly afterwards, he helped build the Galveston Island Art Center in Texas, and later, was the Interim Director at the Rockford Art Museum, launching them into their new space as a regional art museum.
For eight months of the year Wallace lives and works in his studio in a 1920s factory building in Chicago’s Humboldt Park area. In 1990 when Wallace bought the building, the district was extremely troubled and rife with gang warfare. The factory was derelict at that time and had been completely trashed, the plumbing and structure ravaged by neglect. These days the building, which Wallace renovated by hand, is occupied by 17 artist studios. Wallace and his wife, interior designer Deborah Rogers, live and work on the top two floors. Their space is a 10,000 square foot light-filled loft, in which huge looming canvasses and smaller, intense studies compete for space. He estimates that around 90 completed works currently hang in the studio.
During the summer months, Wallace retreats to his studio in Trego, Montana, which he built in 2005. He says that Montana has influenced his work in many ways. “There’s no pollution at all, and so the light goes on forever. It imbues everything you see. In Montana I live with a constant sense of awe and reverence. It informs everything. It’s in the air you breathe. It compels me to paint.”