During his time as an undergraduate at the University of Illinois, Wallace had an experience that would shape the way he thought about his career and life as an artist forever.

The artist, Robert Motherwell came to visit the university to give a series of lectures that coincided with his exhibition at the Krannert Art Museum. As an undergraduate in the painting department, Wallace was assigned by the school to chaperon Motherwell during his trip, driving him to appointments and lectures, and accompanying him on studio visits where he looked at the students work, including Wallace’s own.

People were all over him, clamoring to talk to him, asking him question after question about how to have a career as an artist, how to be successful. On the third day, he said to me, “Do you know Jonathan, you’ve never asked me anything. I’ve seen your work. Don’t you have any questions for me?”

I told him that I’d been listening, that I was taking it all in. Eventually, I said to him, “I know I’m still learning, but the truth is I don’t feel the work I’m doing right now is expressing my true self. I want to know how to do that.”

He looked at me. “But don’t you care about your career?”

Very quietly, Robert Motherwell turned and looked at me. Eventually he said, “Jonathan, don’t be successful. Don’t be like Jasper Johns and get discovered in your early twenties, because your life will be over.” He said, “Be like me—live your life, toil in obscurity until your seventies. Let it come to you. And if it doesn’t come to you, don’t care about it. Because your journey will be fuller and richer. I’ve had my whole life to be able to find out who I am and figure that out in my work and now it’s being given to the world. Hopefully that will happen to you.”

I don’t ever not think about that moment.

At the studio opening earlier this month, a guest remarked on the dramatic differences in scale at which Wallace paints, and asked to know more about this aspect of the artist’s work.

“It’s interesting because traditionally, in terms of modern classical work at least, small paintings are studies for large works. For me, the two are different enough as to be incomparable—in terms of both the experience of painting them and the experience of viewing them. Throughout my career I have wanted my smaller works not to be studies for larger pieces, but to stand on their own.”

As we explored in a previous blog, Wallace works on several paintings at one time—beginning one canvas, then moving onto another as he allows the first to dry, starting another piece and returning to the first to glaze. Generally he works on at least one small canvas as he completes a group of larger works. “Though I do it all the time,” he says, “it is hard for me to go back and forth between large and small pieces because the two processes are so very dissimilar. You have to think in another way altogether. Every aspect—down to the materials you use, the brushes you work with, your gestures—is different. Your mind has to focus in an entirely different way. Hopefully though, you are still creating an image that is in one way very large. The idea is big, though it’s contained by a small space.”

Wallace’s smaller pieces usually take around two weeks to complete. “With those works I begin and quickly get completely lost in the act of painting; in the making of the marks, and in the color, in how it moves, how the eye traverses the canvas.”

“When I’m working on a large painting, I’m way back, I’m forwards, I’m moving, I’m up and down ladders. I have very large gestures and very small gestures. It’s a different kind of dance. When I work on a small section of a larger piece, I get up close and become lost in the marks: I don’t know the whole painting any longer, only the small surface I’m working on. Until I stand back. It still sometimes surprises me that I can be so focused on one small area, and when I step back, I see the overall vision that I hoped to express.”
Posted by Becky at 17:55 No comments: 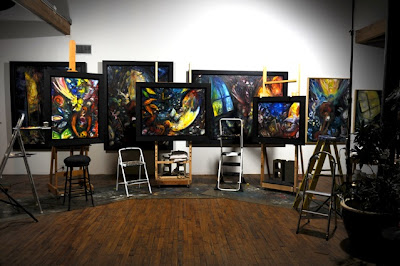 Please join us this evening, Saturday, April 6 from 5-10 p.m. for a showing of Wallace's latest work at his Chicago studio, across from historic Humboldt Park.