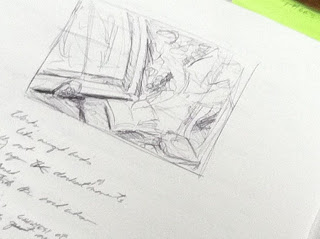 This garden of blue seduction, shimmering in opulent light; cool to the touch in emotions rush. A winged memory, a thread, a note of embrace that has long gone unnoticed.


Words bubble in noise unfiltered, pi unfolds the universe in infinity’s grasp. Unspoken, yet so powerful in silent thought as to be deadly.

We have forgotten the simplest of facts: that our thoughts have a life beyond our greed in their thinking. They rush upon wings of energy to stir forces not seen, changing the very nature of the fabric of time and memory, altering, in subtle touch, the course of destiny.

As they weld ever into infinity’s brilliant light, energies co-mingled and take flight triggering new thoughts, bumping up against muddled minds, enlarging and changing consciousness one letter at a time.

We need to step outside our caged lives and look within towards the Truth that awaits us in silent roar. Each of us has a purpose to be met. Few stumble upon the simplest of light that could ignite the path towards enlightened understanding.

This is the duality that we all abide by. Fractured, yearning for completeness, yet trapped in the ego driven need; without ever questioning the hollowness of our lives trapped within the steady drone of non questioning noise.

Everything known is within. The book of truth that holds multiple understandings of pathways towards understanding is only good for triggering this acknowledgement, of looking within to find the self, the soulness that is the mirrored opposite of the ego, which is the outward appearance of who we are.

This painting is that split, that duality and the liberation of words that have power to take flight upon the wings of soul fire; embracing with those who have gone before to light the way into the white light of the Source of all things.
--J.D.W.

Words,
like winged birds
fly out
upon darkest of moments,
released,
Into this void unknown
flowering,
into greatest of needs, now met. 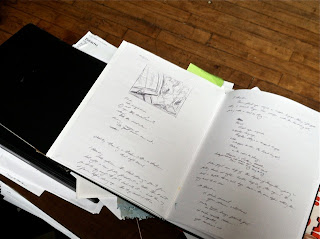 The poem and journal entry which led to the creation of one of Wallace's most recent works.

Return later this week to see how these jotted thoughts evolved and unfolded throughout the artist's process.
Posted by Becky at 14:25 No comments: 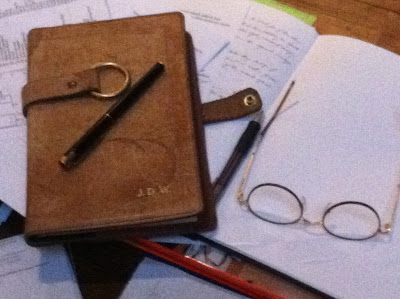 “In high school, my first girlfriend was a writer,” remembers Wallace. “She gave me a hand-sewn leather journal, embossed with my initials, that I could refill with blank books. I still have it. I started writing – silly stuff, high school stuff, about love and heartache.”

Daily, Wallace would note down his thoughts and reflections. At around the same time, he began reading poetry. “I was reading people like Kahlil Gibran and William Carlos Williams – and every time I would read a poem, I would see a painting. I would write and find myself compelled to create.”

Decades later, Wallace continues to write daily, and his writings often inspire his paintings. “I keep a couple of journals – a day to day one, and one which I fill with sketches and notes – thoughts and fragments that seed an idea. Words that trigger a memory, which triggers an idea, which triggers an image that just compels me to paint. I jot down a few things and quickly it fleshes out into something much bigger. I’ve got about 30 years of journals filled with seeds from which my paintings grew.

By the time Wallace comes to put brush to a fresh canvas, he has a composition in his mind, and pages of notes and sketches that he’s formed around a central thought. “But when I’m in the process of painting, it’s like a meditation. The peripheral stuff disappears, the planning, and it’s just me and the paint – I’m totally locked into what I’m doing, and then it’s there– that thought, distilled, in the painting. The actualization of a thought or feeling. Everything I do is about the creative process of understanding.”

In the next few posts, we’ll continue to explore the artist’s process, and will reveal some of the writings and images that have led toward his recent work.

It seems to me that the power of any true art is to induce esthetic arrest revealing a truth. One problem with understanding, when faced with an object of art that has the power to arrest, can be the mental attitude of the viewer himself or herself. For if they are in an egocentric mind, they see the object in the context of either desire or fear. But if they are in a more awakened state or susceptible to the very trigger of awakening, then they see the object of art in its revealing power.

Of course, first of all, the artist has to have created the object in that same transcendent mode. From my point of view, this is the reason so much of art seems to be shallow and projecting either desire or fear, not illuminated radiance. It becomes instead about common measure, whether it be commerce or appropriation, or just the making of things, which is neither good or bad, but for me is just not as compelling.

One way of looking at this is that all forms of life are imperfect. Art has the potential to transform these forms into transcendence, seeing radiance through the imperfection. So awe is what allows us to reach beyond the mundane moment, to find beauty or a greater truth.

The separateness apparent in this world is secondary to the unity that binds us all as one. This energy, this source, flows through each and every one of us—every living thing—and is just a conscious touch away from being magnified.

To recognize in this whole, beautiful world—this universe—a reflection of our most inward nature, is to unlock the doorway into awakened knowledge of the meaning of being here, now, capable of tremendous energy imbuing us to create gifts in all that we do.

To once again participate fully in the sorrows of this world.

My own act of painting is to sanctify the space within, to create a mythology that leads the viewer to discover a personal truth and a sense of awe.