The artist has begun to work on several of the canvasses he built and stretched last week. We are very pleased to be able to share these images with you during the time he is creating. 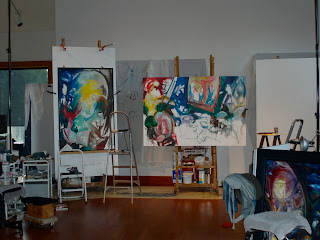 "The painting is unfolding, revealing itself to me by degrees, as long as I am able to set aside my intellect and allow for the spontaneous response to form and movement; a kind of dance of emotions and energy, sparked by a beginning thought and then allowed to burst forth." 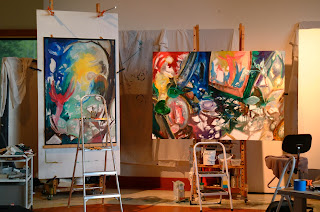 "It is an intense, and exhilarating time, as well as being exhausting, in that every stroke of creation forever changes the direction that the painting will take."

Join us next week to watch as these works continue to unfold.
Posted by Becky at 13:48 No comments:

Progress and Process in Montana: Part One

Wallace arrived last week at his studio in Montana, escaping the humidity and bustle of the city. He plans to spend the rest of the summer here.

"It's a perfect day, 60 degrees. There's still snow on the mountains that surround the property. It's always somewhat surreal to have it be so warm, but to see snow on the peaks." 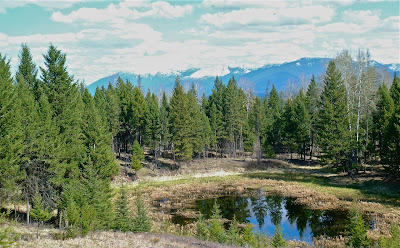 Upon arriving, Wallace began the five day process of building supports for the paintings and oil pastels he plans to create this summer, aiming to build enough to last him through until his return to Chicago - around 20 pieces altogether of varying sizes. Since the process of building one or two stretchers is the same as the process of building a larger number, Wallace prefers to build his canvasses in large batches. "That means I can just paint continually, without having to break the flow of painting and build." 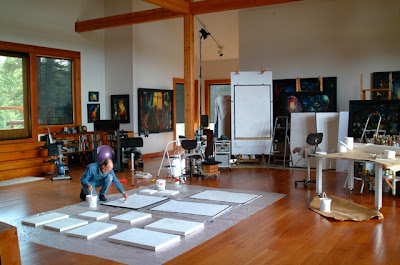 Having assembled 14 stretchers for canvasses ranging in size from just 9 x 12 inches up to 56 x 78 inches, plus 7 mounts for the oil pastels he plans to work on, Wallace adds a coat of gesso to the canvasses. "This is a thicker coat that's very gestural in nature. It's a way of keying in the images that I want underlying the actual painting." 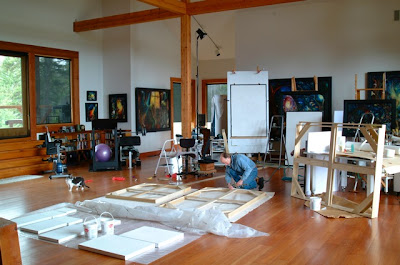 Return next week, when we'll share the next steps in the transformation of these blank canvases.

“I’ve always been very conscious of the distance between reality and the mystery within the painting,” Wallace considers. Visit the studio and you’ll see this fascination played out in many ways in the artist’s work, from perspective to the placement of everyday objects within compositions, to the exquisite frames around some of the works, created from found objects.

“I trained myself to paint like a Renaissance painter,” Wallace explains. “I paint in very thin washes of color, building layer upon layer upon layer, and glazing. During the eighties, I was in the midst of a journey of discovery within my work. The symbolism I was using had begun to evolve, and as such so had the objects I was representing. In turn, even the way I applied the paint to the canvas was changing. When I started working more aggressively past those traditional bounds, I found that the paintings themselves had become violent - they moved faster, the colors swam, the brushstrokes vibrated. They had begun to take on a sense of movement. They started to fly off the canvas. I kept wanting to focus attention back into the painting, but I didn’t want to mute the imagery. I felt they needed to be contained somehow, and I considered how I’d frame them. I started out by simply holding up pieces of wood up to paintings to see what would work. Nothing quite made sense. I decided to build something.”

Along one wall at the studio reside a series of three paintings created by the artist during the eighties. The paintings are stunning – visceral, throbbing with movement. They’re surrounded by huge, sculptural frames of knotted wooden branches which seem to claw out into the space around them. 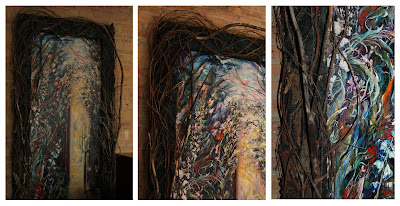 “My works are windows, they’re portals. I think of these frames like guardians – they’re figures, or sentinels that are standing at a threshold. They invite you to cross, or not, from reality into the mystery of the painting.”
Posted by Becky at 03:51 No comments:

The Spring of the Renaissance

On their recent trip to Italy, Wallace and his wife Deborah visited the Centro di Cultura Contemporanea a Palazzo Strozzi in Florence, where they took in the new exhibition, La Primavera del Rinascimento or The Spring of the Renaissance.

The exhibition considers what is known today as the “miracle” of the Renaissance in Florence, and features significant works by such masters as Giovanni Pisano, Arnolfo, Giotto, and Tino Camaino.

“We saw a Donatello terracotta Madonna and child that was painted in rich, subtle hues like you see in pre-Raphaelite works," Wallace recalls. "It was painted in 1445 and was completely different from all his other work, before and after. I believe Rossetti saw it in Paris at the Louvre and went back to England and began his mature style within the Pre-Raphaelite movement. Stunning.”