This blog post is part of an ongoing series. Click to read Part One, Part Two and PartThree 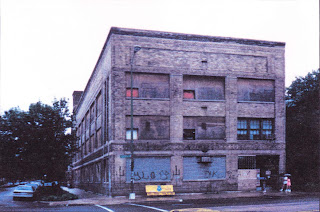 It was 1990 when Wallace purchased the building. The space was trashed, the plumbing and structure ravaged by years of neglect. Water leaked from the ceilings, pouring down the walls when it rained. But Wallace was in love. “It was truly remarkable. It felt right.”

“It was derelict. The windows were boarded up, there was no heat, there was no plumbing, it was trashed.” Still, on the night that he bought the building, Wallace wanted to stay. “In this big, huge, 20,000 square foot space, in the midst of such unrest. I slept peacefully, right through the night, and I woke up the next morning, and… it was as though I felt the building breathe. I think if I hadn’t bought the place it would have been demolished.”

Still to this day, in a couple of spots, it’s possible to make out the footprints caused by the daily pressure of the workers’ feet as they rocked back and forth, pulling screens for hours on end. It took Wallace sixteen full days of labor to clean up the hard rock maple floor. “To me, the concept that somebody just with their pressure, for hours and hours and hours of standing in the same place, actually wore their footprints into the wood, to me it is just… well it’s a testament to so many things.”

When pressed, Wallace explains, “Those illegal immigrants were working in such terrible conditions – yet they did their jobs – they put their heart and soul into working in the hopes of a better life down the road. I look at those footprints, sunken into the hard floors, and I know the countless hours of rocking back and forth, day after day, year after year, in the same spot, pulling paint through a screen, and breathing in those toxic fumes, praying that it was all going to work out in the end. In a way, that parallels my journey in this building too.”

“But those footprints also represent something else to me. They’re an extremely clear symbol of something I never wanted to become – a slave to someone else’s dream. I look at the floor and I remember that no matter how difficult the next task is, that it is my task and I am not owned or controlled by anybody else. I am not, day after day, rocking in the same place, making something for money to go into someone else’s pocket. It has kept me focused towards always being true to myself and my journey.”

Return soon to read the next installment of The Story of Studio 2846, or subscribe on the right to receive updates as they’re posted.
Posted by Becky at 18:21